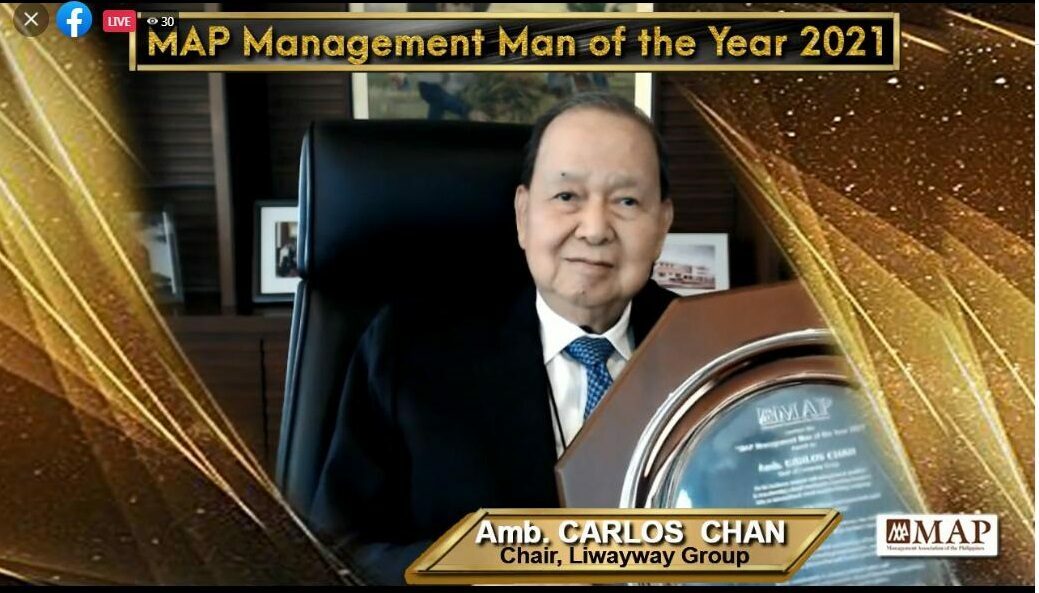 CARLOS CHAN is MAP Management Man of the Year 2021

The MANAGEMENT ASSOCIATION OF THE PHILIPPINES (MAP) announced recently the selection of Amb. CARLOS CHAN, Chair of Liwayway Group, as the recipient of the “MAP Management Man of the Year 2021” award.

The “MAP Management Man of the Year” is an award that the MAP confers on individuals in business or government, whether a member of the MAP or not, who have attained unquestioned distinction in the practice of management and have made valuable contributions to the progress of the country and in reshaping national values. It is bestowed on exceptional persons who have posted a record of achievement and distinction as leaders and managers of organizations, and who are exemplary models who deserve to be emulated by their peers and by the younger leaders and managers.

The conferment of the award follows a thorough, stringent selection process. The distinction of “MAP Management Man of the Year” has only been conferred 45 times in the five-decade history of the award.

The criteria for the award include integrity, leadership and management qualities, contribution to nation-building and values formation, and effective stewardship within the confines of the highest standard of business and management practice, among others.

Amb. Chan was chosen for the following:

1. For his business acumen and management qualities in transforming a local cornstarch-repacking business into an international snack manufacturing company

2. For being an exemplar of the Filipino entrepreneurial spirit that is globally competitive

3. For demonstrating patriotism and for helping enhance the country’s image by carrying the Philippine flag with pride in all his business operations abroad

4. For his leadership role in the substantial contributions of the Liwayway Group to national development through technology improvements, product development, skills training, job creation, and income generation

5. For his contributions to shaping national values and inspiring others by his outstanding achievements attained from humble beginnings through hard work, perseverance, and discipline

6. For setting an example for Filipino managers through a track record of integrity, entrepreneurial excellence, managerial competence, and professional leadership in his management career in both private and public sectors